Incarnations of Immortality live ON! 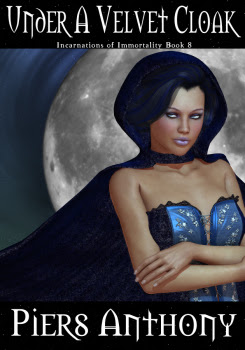 The Long Wait Is Over: Incarnations of Immortality Series Continues

UNDER A VELVET CLOAK, Piers Anthony's newest Incarnations book, has been released from Mundania Press, LLC. The long-awaited sequel about the enigmatic Nox is here, and delivery on pre-orders is promised in time for Christmas.

It's been more than 17 years since the release of AND ETERNITY. Readers of the wildly-popular Incarnations of Immortality series might have thought Piers Anthony meant for it to end with the first seven books. Yet again, Anthony surprises his readers with new books from beloved worlds.

The master wordsmith Anthony is known for nine series worlds he's written solo and several others in collaboration, as well as a slew of stand-alone titles. Best loved among those series are Xanth and Incarnations.

This eighth book in the Incarnations series follows the woman destined to take the office of Nox, the incarnation of the Night. Kerena is a beautiful young girl, living and learning magic in the shadow of King Arthur's Camelot. In service to Morgan le Fey, Kerena seduces Sir Gawain and conceives his child, a child that is fated to die an early death. Rebuffed by all seven major Incarnations in her bid to remove the taint from her baby, Kerena vows revenge on the Incarnations, but revenge that massive carries a cost equal to the gain.

In a change from earlier Incarnations books, but in keeping with Anthony's love of indie press, UNDER A VELVET CLOAK came not from Del Rey, Morrow or . Nox's book has released from Mundania Press, LLC., the five-year-old indie publisher of choice for bestsellers like Piers Anthony, Gary K. Wolfe, Robert Adams, Don Callander, Anne Logston and Louise Cooper. Mundania is home to eighteen of Piers Anthony's books alone, including his ChroMagic series and his joint work with Robert E. Margroff on the Kelvin of Rud saga.

But, UNDER A VELVET CLOAK holds a special place in publisher Daniel Reitz Sr.'s heart. An avid fan of Incarnations personally, he prides himself on being one of the first to see the completed manuscript. He offers the information that Nox's story ties up a lot of loose ends and fills in much of the background material for the series that readers will surely soak up. At the same time, he refuses to acknowledge UNDER A VELVET CLOAK as "the final chapter in the series," leading readers to wonder what else Anthony might have brewing for their favorite immortal offices.

When asked what working with Anthony is like, Reitz responds: "It's been a dream to be able to get to know and work with Piers Anthony. The man's imagination surely knows no boundaries and as the consummate storyteller, no one weaves a better tale. Piers is also easy to work with as a writer, having so much knowledge of what makes a good story and how best to present it, so editing is a breeze."

Piers Anthony states that he originally planned ON A PALE HORSE, book one of the series, to be a stand-alone novel, touching on the various aspects of death. Once he came up with the concept of "Death" as an office rather than merely a role or fact of life, an office that any person might manage to step into, under the right circumstances, he realized that he could do the same with some of the other key aspects of existence: Time, Fate, War, Nature, Evil and Good.

"Originally, I planned to stop at five novels, because I thought readers would consider it unacceptable to address Satan and God fictively. But as reader responses came in, I found no such concern, so I decided to complete the roster." Further, Anthony reports that he did think the series complete at seven books, but the readers had other ideas.

Though the readers wanted more books, especially Nox's story, Anthony originally declined, believing that anything after tackling God as a subject would be "anticlimactic." He continued to demure for more than a decade and a half.

Piers Anthony admits to being daunted by rereading material so old and creating a "series Bible" of the facts, dates and other particulars that would be necessary to start a new book in the series. Then Jean Prior, a reader that runs a fan site with the nickname "," created a chronology for the series and posted it at http://www.spundreams.net/~phoenix/IoIChron.html With the facts and dates already amassed for Anthony, the author saw continuing a long-dormant series as feasible.

The second change was a letter from Stephen Smith, who not only suggested Nox as the next core character again but also included the skeleton outline of a story for Nox. His three pages of suggested summary set Anthony on the path to completing this novel. It's the first time Piers Anthony has ever taken direction from a summary idea sent by a reader, and ultimately the story "as written" left the summary suggested far behind, moving in its own direction. While the early chapters were conceived by Smith, the rest of the book is from Piers Anthony's wondrous imagination.

After querying his readers via his bimonthly column at http://www.hipiers.com, Anthony found an overwhelmingly favorable response to the idea of a new Incarnations book, centering around Nox. Coupled with the option of ON A PALE HORSE by Disney, the opportunities for a new Incarnations of Immortality book were prime, so Anthony started writing early in 2004.

Jean Prior and Stephen Smith weren't the only readers Anthony hails as being instrumental in his writing process. Tim Bruening, a reader with a phenomenal memory for detail, asked so many questions about seeming departures, most chalked up to multiple timelines and the human condition, that Anthony engaged him in helping to check UNDER A VELVET CLOAK for continuity.

Based on the reader response to the project, Mundania Press has pulled out all the stops for this release. In addition to the e-book and trade paperback releases all Mundania books enjoy, an expanded edition, containing bonus material not in the trade release, will be available in 250 numbered and signed hard-bound and dust-jacketed copies and 26 similarly-enhanced lettered and signed copies.

Though Anthony describes fantasy as "generally low-research type of writing," he admits he did a lot of research for Nox's book. Borrowing from the fringes of Arthurian legend and researching magic from sources such as Patricia "Trish" Telesco's FOLKWAYS: RECLAIMING THE MAGIC & WISDOM, Anthony shares: "It really pays to have the right reference at the right time."

It might surprise readers to learn that Piers Anthony harbored concerns about his ability to sign this book to a publisher. He commented: "Many readers think that a successful author can sell anything he writes; that's not the case. The market is highly competitive." Thankfully, there was no such difficulty in finding a publisher for UNDER A VELVET CLOAK.

What is Piers Anthony's life like these days? "My wife and I live in a house on our tree farm, celebrating five decades together in reasonable health, considering our retirement age. It's really a pretty dull life, aside from my writing career."

Like Reitz, Anthony teases readers with future possibilities for Incarnations. "I think this novel does conclude the series, though perhaps only Nox knows for sure, and she's not telling."
Posted by BrennaLyons at 5:45 PM