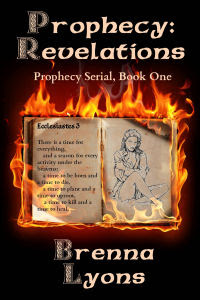 Prophecy: Revelations by Brenna Lyons
contemporary action paranormal sensual romance
108163 words, 470 pages
$1.99 FREE from 12/23/2016 through 12/30/2016 on the following distribution channels:
Fireborn
Kobo
BookStrand
When Joe Connor is hired to protect Kyla Keating, he thinks his boss is insane. Why would Samantha "Gram" Allen hire him to watch and protect a woman she doesn't even know? Gram doesn't even want to know Kyla. She only wants to know two things. Is someone else watching, and does Joe see anything unusual? Joe has no idea how unusual things are about to become. Kyla is the subject of a prophecy, a woman with fantastic powers, an unknown quest, and a ghost guide. She also has a personal army of bodyguards and enemies who will kill her, none of which she is aware of. It is Joe's destiny to love and protect her, but when he has to kidnap her to keep her from being killed, will he ever win back her trust so he can do his job?
CONTENT ADVISORY: This title has a "to be continued" ending and is completed in Prophecy: Rapture.
Posted by BrennaLyons at 12:30 AM