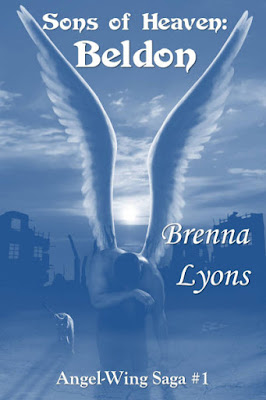 Sons of Heaven: Beldon (Angel-Wing Saga #1)
by Brenna Lyons
science fiction contemporary erotic romance
25790 words, 148 pages
$1.99 in ebook
We've talked about them for millennia. The Sons of Heaven came to Earth and lay with the Daughters of Man, spawning the heroes of old (or the monsters of old, depending on your mythos). They have been called angels. They have been called demons, the fallen, the devil... Somewhere behind the myths, there were men, winged men who came from the stars and took simple human women as mate. It is time for one modern human woman to discover who and what the Sons of Heaven were, and that discovery will change her life forever.
When Jannie Reynolds goes down the line into the deeper caverns in search of more artifacts depicting the winged god-man, she doesn't know a team member with a thirst for fame intends to cut her ropes. She doesn't know her life will be saved by alien technology or that she will stumble upon a five-thousand-year old winged alien in a stasis tube who doesn't know his colony has been destroyed. And she certainly doesn't know she's an alien crossbreed, as well.
CONTENT ADVISORY: This is a re-release title. 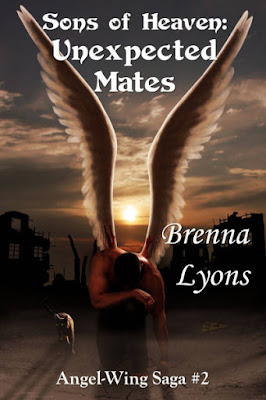 Sons of Heaven: Unexpected Mates (Angel-Wing Saga #2)
by Brenna Lyons
science fiction contemporary erotic romance anthology
93901 words, 533 pages
$4.99 in ebook
The consulates on Earth have been established, but life is far from smooth and easy. Some days it seems that anything that CAN go wrong, does. Between legal problems with the Earth governments, chance encounters with unexpected results, and the tensions inherent in a male-heavy race fleeing extinction, there's rarely a dull moment in the consulate.
Meredith has been advocating for foster children for her entire career, so when the courts and child services conspire to remove an Earth-born Sakk child's wings, she'll risk jail to keep that from happening. She goes to the Sakk consulate seeking asylum for Alice and finds herself partaking of the same.
Hayley and Holly are as different as night and day, but the sisters have never been apart. When Hayley decides to indulge one of her younger sister's flights of fancy, little does she know they are going to become the belles of the Sakk ball.
When Beldon and Jannie return to Sakk, Sakkra (the younger Sakk prince) becomes emissary to the humans. Little does he know how difficult the job will be. Between armed attacks and political nightmares, it seems the prince can't even eat a meal without interruption. Enter Amy. She doesn't want to test as a match; she's happily engaged and happily human. She's only at the consulate to offer support to a friend who is testing, but when her friend turns out to be very human and Amy turns out not to be, her life falls apart.
When Amy's other cousins tested as too human to be matches, Jolene didn't bother. A one-night stand with Rietin (a wingless Sakk tracker and Amy's personal guard) ends with an unexpected pregnancy, but can Jo overcome her belief that Sakk men see all women as alike and find happiness with him?
Sandy has had a lousy year. Her POS boyfriend dumped her when she got pregnant. Her step-father kicked her out of the house, leaving her homeless. The shelter has only let her stay as long as she has, because she's pregnant. And now...the final straw. Her sonogram shows the baby she's carrying has wings. Her last chance for safety and stability is finding a home with the Sakk.
CONTENT ADVISORY: This is a re-release title. 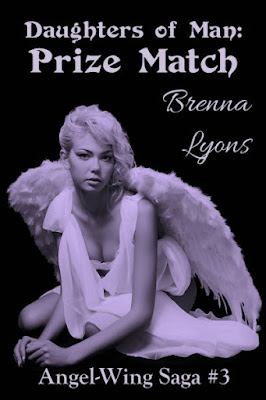 Daughters of Man: Prize Match (Angel-Wing Saga #3)
by Brenna Lyons
science fiction erotic romance
11760 words, 69 pages
$0.99 in ebook
Sabine has come to Sakk, a winged female, a prize match. Her mate will be an older male, a general or master general. She has no choice in that. The only power she has is to refuse an abusive mate.
Sahtahn has no intention of fighting to approach the prize match, but when Sabine is attacked on her way to the riser, he changes his mind. She's not the cold woman he'd believed her. She's a frightened young woman in need of a gentle hand. If she accepts his advances, he will have the greatest prize imaginable.
CONTENT ADVISORY: This is a re-release title. 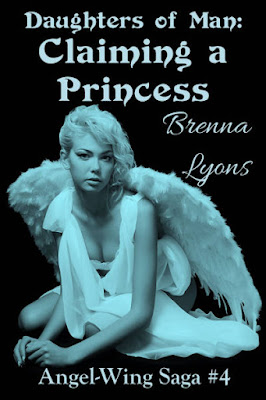 Daughters of Man: Claiming a Princess (Angel-Wing Saga #4)
by Brenna Lyons
science fiction erotic romance
15831 words, 92 pages
$0.99 in ebook
It's a tradition as old as recorded history.
The eldest prince chooses his bride from among the genetically strongest toddlers, and she is raised to be his princess. Though he doesn't believe a true bond can form between them that way, Sakkriel chooses an enchanting child that grows to be an exasperating young woman.
Now all he has to do is prove himself the god-descendant he is to claim her.
CONTENT ADVISORY: This is a re-release title.
Posted by BrennaLyons at 9:28 AM