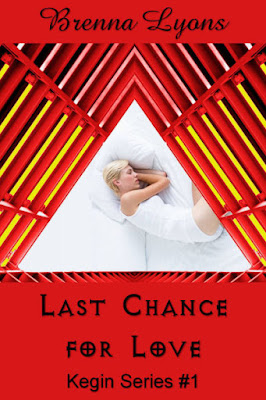 Last Chance for Love (Kegin Series: Earth-Born Lords #1)
by Brenna Lyons
114092 words, 607 pages
$4.99 in ebook
Welcome to Kegin, a world dying from genetic decay. Every move to counter it has been a stop-gap measure...until now, Jole hopes.
Susan Braedan has no idea when she goes to bed one spring night that she will never see her home on Earth again. Susan is not a normal woman. She is not quite Human, not Human enough to reproduce with Human men. Susan is the last desperate attempt to save a dying world, and she has been chosen as Cross-Mate to Prince Jole. Raised by his Cross-Mate mother, Jole knows better than any man on Kegin how an Earth woman should be treated to win her love and respect, but can he accomplish that before his younger brother, Mik, can claim her for his own?
Mik has been raised with all Kell's hate and misinformation. He doesn't want to be that man anymore, but can he overcome his many mistakes, hold tight to his sanity, and start anew in a society that sees him as nothing but a madman and a criminal?
When Susan was taken through the gateway, she performed the most stunning disappearing act in history. Only signs of a struggle, strange boot-prints, and a smear of her blood were left behind, and no one had emerged from her apartment. Believing Susan is a pure-blood alien, the government searches her family for more of the same...and finds her cousin Alex, another third-generation Keen rebred. Held in captivity for two years, everything changes when the government finds another of their kind...a female...and puts Alex in close proximity with Lyssa.
CONTENT ADVISORY: This is a re-release title.
Posted by BrennaLyons at 11:05 AM