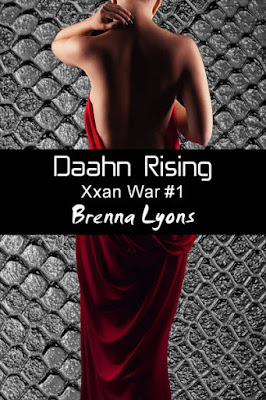 Daahn Rising (Xxan War #1) by Brenna Lyons
science fiction action erotic romance
67594 words, 378 pages in ebook, 310 pages in print
$3.99 in ebook, $13.99 in print ($11.19 on CreateSpace with coupon code on sale page)
The Xxan and humans have been at war for five decades. Despite the ongoing hostilities, a small group of captured Xxan have assimilated into Earth's culture and become strong allies. They have even interbred with humans. That doesn't mean all is calm between the allies...or their enemies.
It's MATING SEASON. Zondra Daahn has hit her quickening with both feet and no warning. She's on the prowl for a male to sate her, and Evan Duncan is just the overbearing, alpha male she needs. There are just a few little problems...
Miri Johns is a negotiator for the Xxan. When it all blows up, she finds herself captured by humans, an illegal crossbred experiment used as a weapon against them. The best she can hope for is that they'll kill her without torturing her too badly first. Aleeks Daahn is a natural-born crossbreed, raised on Earth. With Miri at the height of fertility, Aleeks may not be able to control the Xxan need to Dominate and claim his young prisoner. Nor does he want to control it. Are two crossbred Xxanians CLOSE ENOUGH TO HUMAN to survive in the human world?
CONTENT ADVISORY: This is a re-release title.
Posted by BrennaLyons at 2:10 PM