Wahoo! Back around again and with lots of news! 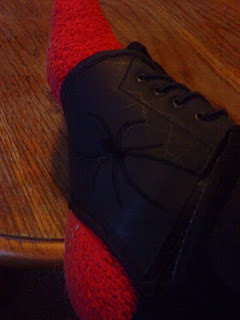 Some of you folks know I've been out of touch for a bit. Between severely spraining both ankles (6 weeks in and still trying to heal), three weeks so far in a leg brace (but isn't the embroidered spider design too cool?)...and getting through EPICon (which I was co-chairing this year), I haven't had much time to blog.

So...what has everyone missed?

And the big news is?

That's not the only news. BRIDE BALL was the #8 bestseller for Phaze in 2010. Not bad for a book that three NY agents and a NY editor turned down and said: "You can't do that in an urbanized fairy tale!" Not only did she final for the EPIC eBook Awards, but she also spent two months at the top of Phaze's site sales, weeks on top at Fictionwise, and then took one of the bestselling of the year!

WRITTEN IN THE STARS isn't sitting on its laurels, either. She took Joyfully Reviewed's Book of the Year for 2010!

Isn't Niki Browning's art for BELDON fab? EPIC seems to agree. The art was a finalist for the ARIANA cover art award this year!

OMG! The new releases since you've talked to me last! I've had five releases in just over two months.

BINARY STARS 8: Choosing A Mate/Starting A War (NWW-BINARY Histories) from Phaze in e-book

And I still have more coming in the first half of the year!

May The Best Man Win from Phaze

Monsters of Myth from Mundania Press, LLC. in e-book

Isn't that cover just gorgeous? I think so.