Night Warriors RE-RELEASED in ebook! One still to come! 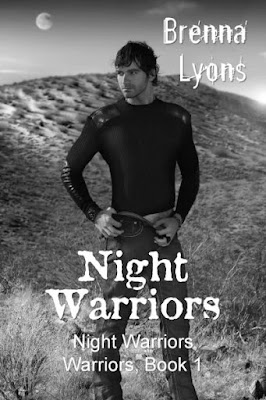 "For the extinction of the beasts that walk the night, we will give our life's blood and our lives. Such is the curse we were born to. Such is the duty we swear to. Such are the lives we lead."

Unknown to humans, Night Warriors hunt the night, saving them from vampire-like creatures called beasts. When Corwyn Hunter saves Anna from the mad elder Veriel, he is irresistibly drawn to her as mate, but there is more to Anna than there seems. Veriel has fixated on her, claiming Anna is his wife, a situation she is at a loss to explain. Is Veriel truly mad or does he have a claim on Anna and her unborn child?

Whichever side ultimately claims Anna's child will rise the victor. It is a battle neither side intends to lose, no matter the cost.

The warriors have avoided training a female for 1500 years, but the stone will not be denied. It is time for a change in the Warrior ranks. 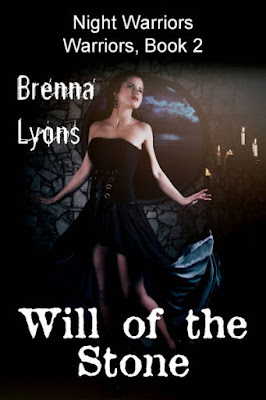 Will of the Stone (Night Warriors, Warriors #2) by Brenna Lyons
paranormal action erotic romance
125826 words, 652 pages
$4.99 in ebook
Hunter Cross, the Konig prince, is relegated to running the Crossbearer range while his sister, Erin, is the unwilling belle of the ball. Neither of them is happy with their places in the scheme of things.
When the last elder decides he wants both Erin and Sarah, the most powerful human sensitive ever encountered, as his mates, it's up to their men to protect them. Or is it? Erin is not what she seems. She is a force beyond all comprehension.
Erin isn't content to submit to the stone. For Erin, autonomy means freedom not to mate. If she can avoid Curt Maher, she can make her plan work. Curt has waited eight years for Erin to come to him. He's played by her rules for far too long. He will have Erin as mate, even if he has to conquer her in battle to get her. Little does he know that Erin wants to be conquered.
He cannot be lied to. He can see into your soul. He is Mikel Cross, the Konig prince, and Holly is destined to be his bride.
"One of the best fantasy worlds available to readers on the current market. I recommend the whole of the Night Warriors series. If you haven't read Brenna Lyons yet--go and buy her books today." Jaynie Ritchie for Romance Junkies 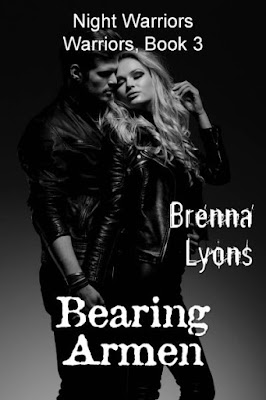 Bearing Armen (Night Warriors, Warriors #3) by Brenna Lyons
paranormal vampire action M/M and M/F erotic romance anthology
171319 words, 957 pages
$5.99 in ebook
Armens are known for two things--crafting the finest blades in the Warrior world and falling for saved, hard and fast. It's one of the few Warrior-rich ranges, but printing is rarely easy.
James Armen's only wish is a home and family. Beth Havens is a widow with twin little girls. She never imagined life with a vampire hunter. He never dreamed that he'd be blessed with daughters.
Devon vowed to do anything to have Michelle as mate. When he goes too far in the grips of printing madness, it's up to him to make peace somehow, even if that means serving her father, James Lord Armen.
Insubordinate. Bastard cursed. Felon. Scott Danvers has been called many things in his life, few of them favorable. Born to a blade chaser and hidden from the Warriors, Scott is nothing like his peers, from his blond-tipped hair and tattoos to his attitude.
Alyssa Bradley is a minefield, a Warrior widow, traumatized, alone and pregnant. But Daniel Hunter knows there's something beyond that, something his gut tells him is much worse.
Stevie has had a rough life. Terry has been attracted to men as long as he's been attracted to women, but he never followed through. Warriors of Armen tend to fall fast and hard for women they save, but it's not a woman that catches his attention and stokes his need to print.
Nothing in his training has prepared Corey for the Beast enclave he encounters. After three days in the hands of the Beasts, Hannah is scarred, blood weak, and suffering severe PTSD. The only person Hannah trusts is Corey. With the aid of the Stone in controlling his drives, can he help Hannah reclaim her life and her sexuality? 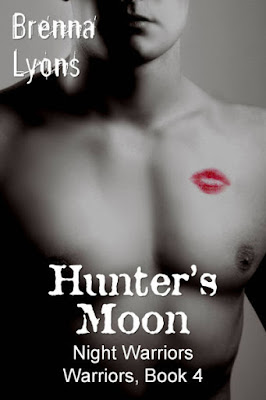 Hunter's Moon (Night Warriors, Warriors #4) by Brenna Lyons
paranormal vampire erotic romance action anthology
117007 words, 648 pages
$4.99 in ebook
"There were just a few little problems with tall, dark and sinfully-godlike. For one thing, he was bleeding all over himself."
Between Anna's death and Jayde's discovery, Haus Jager was a place of secrets. Who is Laura Briony? Why is she prized? How was Colin forced to choose his mate, and who is Jannelle Evans? How does Stephen eat his words? Did they ever have hope of finding Erin?
Three brothers who have no intention of mating and three women who find themselves targets of Veriel's inner circle are about to embark on the greatest challenge of their lives. Headstrong women are the bane of the Hunter men. Headstrong women who might help him claim Erin are targets for Veriel. The Mad Deceiver will stop at nothing to find Erin.
Stephanie is trouble, a lord's daughter who can never admit who and what she is. Her father's life depends on secrecy, but that is easier said than done. 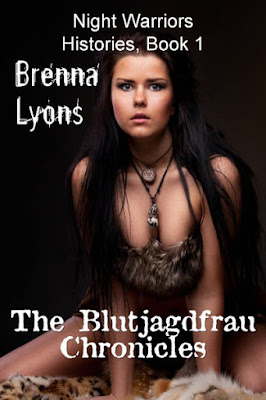 The Blutjagdfrau Chronicles (Night Warriors, Histories #1)
paranormal action erotic romance
92734 words, 507 pages
$4.99 in ebook
"A series grows with unanswered questions and what-ifs." Brenna Lyons
When Reg destroys Ori in a mad bid to claim the mother goddess as his own, the distraught young woman is left to choose another mate from among the remaining Warriors. She knows them all by face and cannot choose. There is only one thing left a man believes will matter.
When Oren and Piet are called before the Stone lord, Gatin, they believe they are to be given extra instruction. Instead, they find themselves faced with the blindfolded and half-naked Ragan. One of them will fall. The other will claim what is rightfully his, by the gods' decree. Ragan.
Orphaned at birth and left to be raised by the barbarian refugees, Korji and Ahdia have no idea which dark giants are friends and which are foes. It is up to Taigh and his family to bring the lost children of Ani home.
What if Veriel had managed to steal Jayde? What if she'd been raised in seclusion, lied to, denied her training... crafted into the perfect mate for the beast? It all happened in an earlier beast war. Gaffin and a team of other Warriors have tracked Veriel to the greatest prize of all...Ragath. 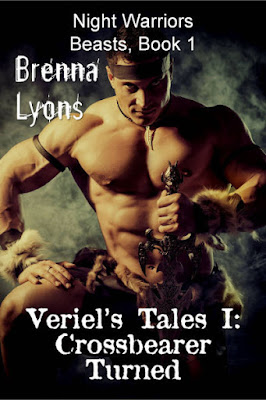 Veriel's Tales I: Crossbearer Turned (Night Warriors, Beast #1)
historical paranormal action erotica
82134 words, 428 pages
$3.99 in ebook
In book one of the Night Warriors series, questions were raised about Veriel's motives. Did he have a claim, or was he insane? What relationship existed between Jorg and Regana? Who did Regana love (her husband, Pauwel elder killer, the "Crossbearer Turned", or the beast Veriel), and who was Andris of Crossbearer's father? This book answers it all.
"Veriel, Regana and Pauwel--perhaps the most famous trio of the whole series--are on the front stage in this book. A story of love, honor and betrayal unfolding against the ruthless backdrop of the warriors' lives, mortal risks and immortal souls being at stake. The blend of romance, drama and mystical lore makes the reading experience quite enjoyable." Reviewed by Daria for Romance Junkies 4 Ribbons!
"Ms. Lyons has given us another great story, one that answers the questions of why Veriel turned beast and why he went after the Anna. She has once again gripped us by the shirt collar and woven a spell of a fantasy world that has warriors that protect the innocent. It may be that all is not what it seems and that Veriel isn't as evil as we thought." Reviewed by Donna for Fallen Angels Reviews 5 ANGELS 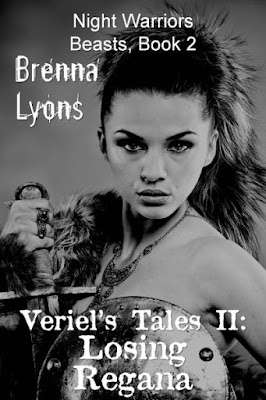 Veriel's Tales II: Losing Regana (Night Warriors, Beast #2)
historical paranormal action erotica
88673 words, 472 pages
$3.99 in ebook
Jorg has lost his mate again and again, his punishment as a traitor to the gods. He is driven to protect her and fated to lose her. Ilona...Caitrina...Yzabeau...
They know him. Their bodies remember Jorg's touch, and they will do anything he asks to experience what they remember. In the night, they are his, born to revel in every carnal sin. Then comes the day. With the sun, sanity returns, and danger stalks them.
Rober started off using Jacquine as bait to trap the Mad Deceiver. Now he has to convince her to be his mate or face breaking printing. If Veriel shows his face, Rober is ready to meet him, madman to madman.
"This is definitely not a "feel good" light kind of read. This story is filled with tortured souls, lost love, and the inhumanity of man. It explores the darker part of life; from torture, bought women, and the struggle for power, we gain an insight of how a favored warrior can become a beast. For all you lovers of the darker side of the human soul, this story is one I recommend putting on your TBR list." Reviewed by Chere Gruver for Sensual Romance
Posted by BrennaLyons at 9:30 AM