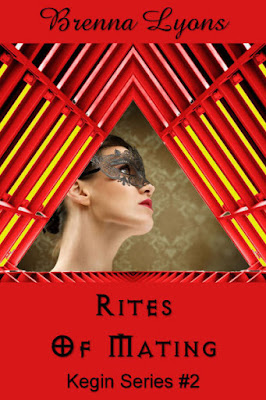 Rites of Mating (Kegin Series: Earth-Born Lords #2)
by Brenna Lyons
science fiction erotic romance
62651 words, 346 pages
$3.99 in ebook
Pushed by his family to form an advantageous re-bred marriage, Tirin has decided that the last thing he wants is a pampered princess in his life...until another suitor goes too far in pursuit of Princess Jenneane. Dragged into the insanity and intensity of her world, Tirin finds he wants nothing more than to claim his MAIDEN BRIDE, and Jenneane is that bride.
Berel has been raised as servant sister to the royal children, but her feelings for Joseph are anything but sisterly. She's been warned off by the nobles and has long since given up hope of having Joseph for her own. Can he change her mind by convincing her to a TRIAL MOON?
CONTENT ADVISORY: This is a re-release title. 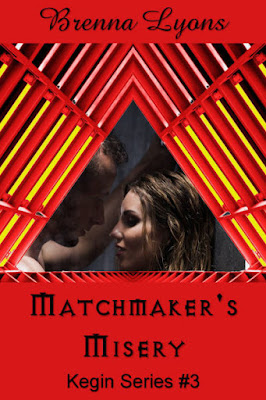 Matchmaker's Misery (Kegin Series: Earth-Born Lord #3)
by Brenna Lyons
science fiction erotic romance
60961 words, 351 pages
$3.99 in ebook
Cored's attempt to capture Pilar as his re-bred mate goes completely awry, leaving him exiled from Braeden Home and barred from pursuing Pilar, forcing him to re-examine his quest to regain his title and fortune. When Pilar pursues him, his life only gets more complicated. Will a Trial Moon save his neck or cook his goose?
Jearsen, damaged at birth, has been pampered and hidden away, an embarrassment to his noble family. Eve challenges him to stop accepting the assumptions about himself, to pursue the truth of his existence. But will those truths cause heartache or bliss for the two of them?
It's rare, but it happens--anaphylactic responses to the drop of the first egg. Kyra has sworn off men for life. Though Steden has always wanted her, he's been relegated to 'safe, male friend' for a decade. Then Kyra makes a startling request; she wants him to be the father of her child. Can a woman scarred to the act of love claim the man of her dreams?
CONTENT ADVISORY: This is a re-release title.
Posted by BrennaLyons at 12:09 PM